Ten unplanned days in Washington Crossing flowed into one another like a ribbon of syrup poured over the challah French toast Joyce made our first morning here (and our second, and any other day her grandsons asked for it), sweet and slow. Instead of schedules and reservations (e.g., our last visit featured a dozen cousins at GoKart races, ax-throwing, and a New Year’s Eve Party — all on the same day), these shutdown days were somehow filled by dog walks and Bananagram tourneys, shooting hoops and watching NBA games, teaching Emmett to drive stick shift on Peter’s 2005 Mini Cooper, showing Maria the real-life settings of her favorite stories from Christopher’s childhood, cooking and eating and stretching and reading, and choosing keepsakes from Peter’s closet — the plaid flannel shirts that will be tactile memories of a grandfather’s and father’s embrace. In many ways, this has been our fullest visit yet. 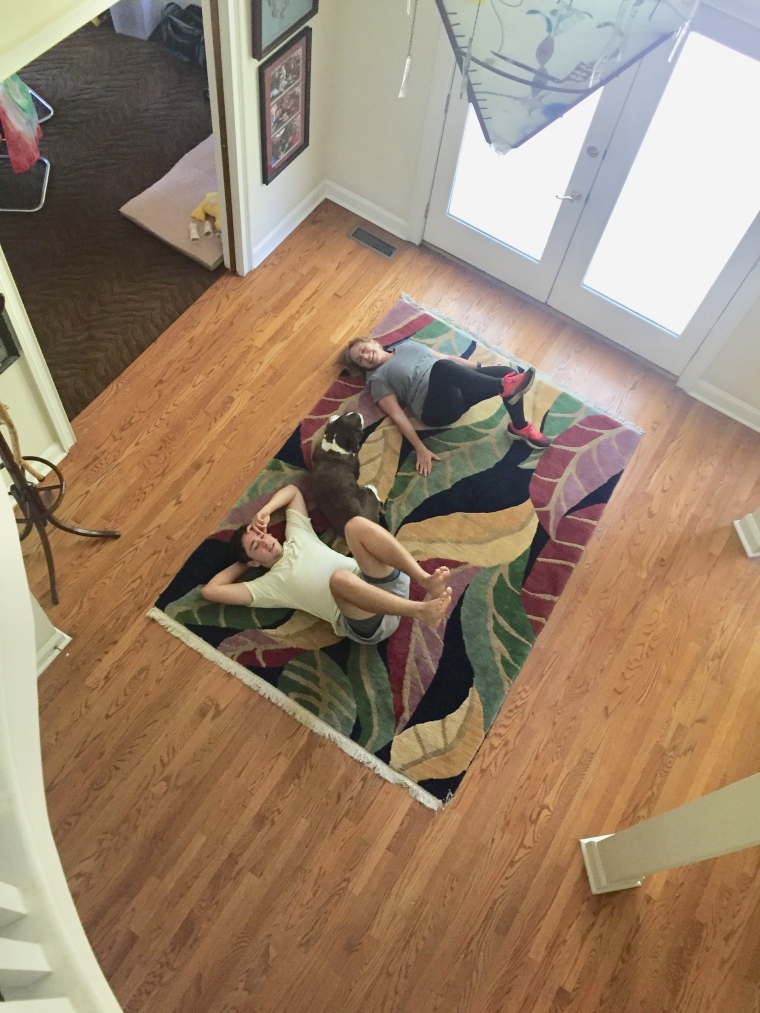 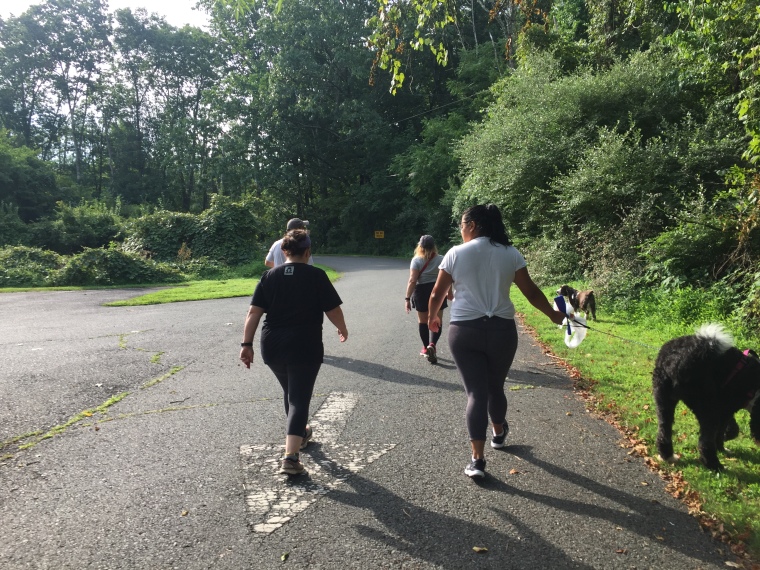 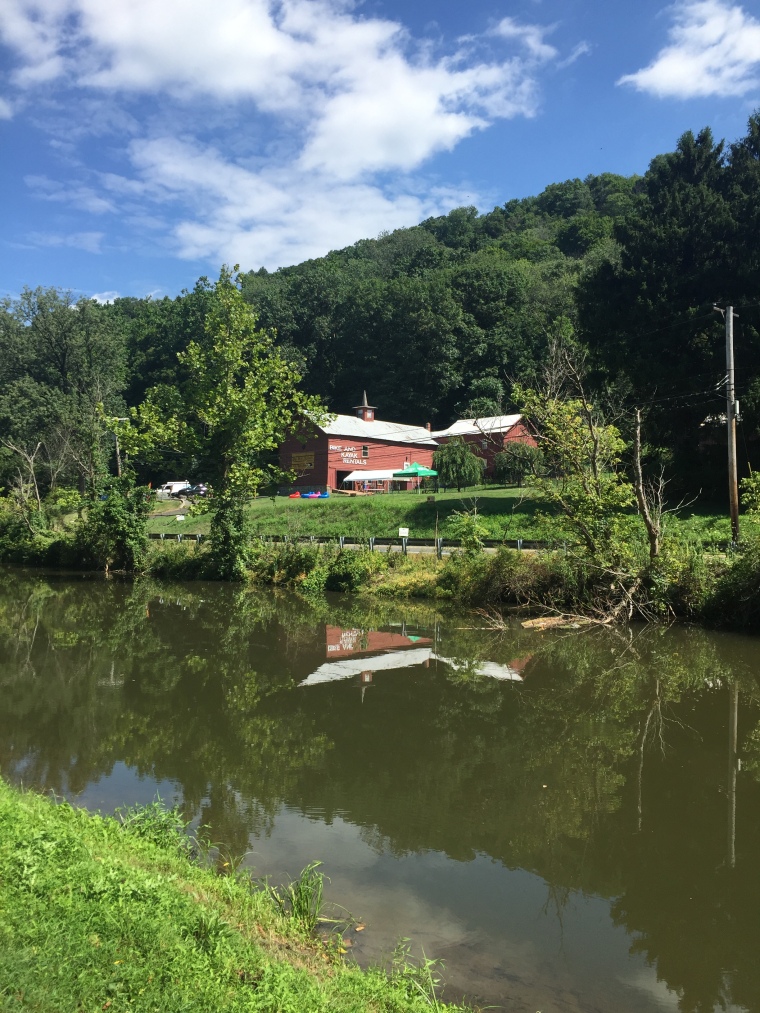 I started counting the days when there were two nights left. It was the same when we were on the RV. When there are only two nights left, you can feel the end coming. You lose your sense of being in the moment and start thinking of what comes next.

Our leaving would go in stages: Emmett and me flying straight home, Aaron visiting college friends in D.C. and Denver first, and Christopher staying here two weeks, to take care of his mom and let her take care of him.

The night before we left, Aaron asked if I would be getting up early to see him off. As if I have ever not said goodbye.

“Want a bagel?” I offer in the morning when he comes out of his room at 6:15 a.m. I am happy he says yes and lets me do this last mothering before he slips away. Christopher is ready to take him to the Amtrak station. He has been the keeper of the travel file during this journey — every campground reservation printed out, in order — and Aaron’s train ticket is the final piece of paper in that neat stack. Everything we have planned has passed.

Emmett the night owl is still sleeping, though he will have to get up soon to leave for our flight. Aaron is almost out the door when he pauses to ask if he should wake his brother to say goodbye. Yes, I say. Go hug him. Final goodbyes are on my mind. It’s unthinkable, but you never know which will be your last.

Aaron goes up the carpeted stairs to say goodbye, and I follow to watch this unfold. I take internal bets on whether Emmett will be receptive to his brother’s attention or annoyed at being woken, whether Aaron will act with grace or brotherly poking, whether their goodbye will turn into a squabble. I put the odds at 50/50.

Aaron pushes open the door to the room where Emmett sleeps on the sofabed they used to share, before they grew taller than us all and got separate rooms here. I keep my distance, not wanting to infect their moment with my gaze, but desperate to know how it unfolds. Sunlight bounces off the open door. I hear murmurs. I move closer. I can see Aaron standing facing the sofabed. He says something. Then waits. I inch closer. I see Emmett come to his feet, a film of sleep around him and eyes half-closed, and reach his arms wide for a full body hug. I retreat down the stairs blinking my eyes.

Aaron comes down behind me. He is ready ready ready to leave, but he lets me squeeze him twice. He beams with the freedom that is almost his. He has been counting down to this day since mid-March, and for the past five nights he has held up his fingers to show us how much longer until he is set free. After a brief visit with his friend in D.C., he’ll fly to Denver to spend a week with another friend, before they drive together to L.A. to pack up and get the heck to Eugene. These kids have had almost as much time apart as they had getting to know each other before they were buckshotted out of their dorms and scattered to their parents. They are ready to pick up where they left off.

Christopher and Aaron leave for the train station, and I finish preparing for our departure. Christopher will walk Aaron to the track like he is a little boy, not a young man who has done this before. Maria arrives to drive with us to Newark airport for one more in-person visit.

At the curb, still in the car, I put on my mask and a plastic shield, then remove them to kiss Christopher goodbye. I hug Maria, and quickly quash the thought that I do not know when I will see her again. I move through Newark airport with my double layer of armor. Looking out through plastic creates a reverse-telescoping effect. I make the minimal movements necessary to process through here, swerving away from others’ bodies as they swerve from me. 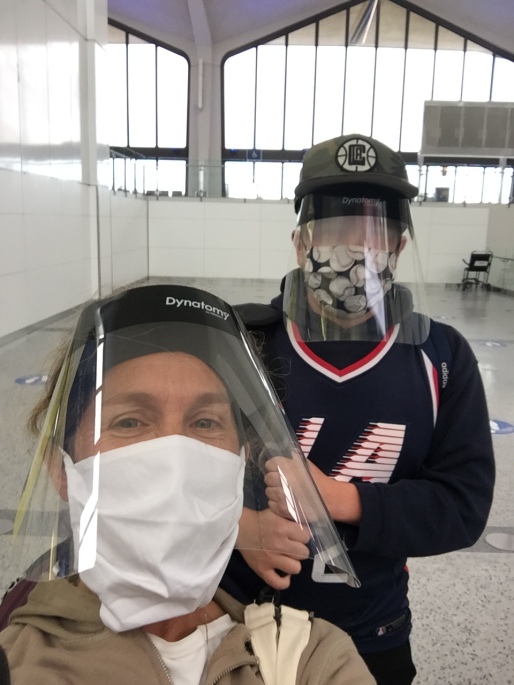 At the gate, I suggest we wait until the end to board, and Emmett defers to me. Whatever you want mom — not defiant, but gentle. He does not sound like the youngest in the family, but has taken up the space of his older brother and father, handling his nervous mom with kid gloves.

When we step up to board, he makes a show of patience while I present our digital boarding passes. I do know how to do this, I want to say to him, but I let him think I’m a slow “Boomer” and he is the grownup. Down the hallway we go. It is placid and empty, everyone cooperating and distanced. We walk through the oval entrance to the plane, where a young flight attendant who looks barely out of his teens welcomes us. Our seats are the very first row, bought with miles gifted by my mother. (“I won’t be needing these any time soon, and I’ll feel better if you use them,” she had said.) Emmett and I look at each other in wide-eyed amazement, masks hiding our dropped jaws, and stifle our inclinations to shout: “Wow! Are you kidding me?!” Our seats are large, face away from the aisle, and have footrests so far from the chair that I have to scoot mine closer for my feet to reach it. Two bottles of water and a biscotti wrapped in plastic sit on the wide space between armrests. Emmett asks, “Is this for us?”

We settle in. I will hold this position for the next six hours. I will not get up to stretch, or use the bathroom, or even turn around to plug in a charger or the airline’s headphones. I will doze and scroll through my memory bank of the last two weeks. I smile with the knowledge that we will fly across the entire country in the amount of hours we spent driving it each day for eight consecutive days. And while it is a relief to make the return so efficiently, in such comfort, I will be forever grateful that we took our time on the initial journey. I would have missed so much.

Thank you for taking this journey with me.