I am at the wheel ascending a stretch of the Appalachians in West Virginia, thinking about how much I have savored this stolen week with our foursome. I even manage to remember that no one can hear my thoughts and say this out loud. I get a patient, if tepid, response. “Yeah, mom. Uh-huh.”

A mile marker announces Maryland is coming soon. Aaron snaps to attention and switches his phone to camera mode in the nick of time. Not long after, we sneak up on Pennsylvania, come in through the side door, greeted by a motto I’ve never seen: Welcome to Pennsylvania. Pursue your happiness. 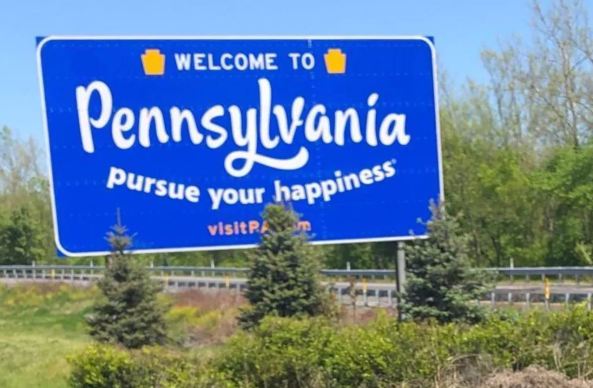 We are so close now. We have only to cross the state. We pass farmland, red barns and silver silos. Big rig trucks get stuck behind me, and I balance my concern over annoying them against my concern over keeping my family safe. I choose safety: Let them tell the story over beers later tonight, of getting stuck behind a filthy RV with California plates driving the speed limit.

I pull over to gas up before we get onto the Pennsylvania Turnpike. To all three boys’ rapture, there’s a McDonald’s sharing this corner. After 3000 miles, the first and only McDonald’s run; it is now officially a road trip.

“We used to ride the Pennsylvania Turnpike to debate competitions in high school. We would get off at the rest areas with these giant food courts…all the high school kids…you can imagine…” Christopher trails off into memory. The rest stops are infrequent, he cautions me, miles and miles before your next chance to take a break. So before I get too tired, and before darkness covers the night completely, we switch places. I leave the last two hours of driving to him. This is partly out of selfishness — it is harder driving at night — and partly out of generosity. I want him to have the sense of completion and success in bringing this 8-day trek to a close, of bringing us home.

Singing makes the driving easier. Back in Kansas, we finally figured out how to connect his phone to the Bluetooth, and since then we have overplayed Billy Joel, Bruce Springsteen, and my 50th birthday party mix. Now we sing along with the Indigo Girls, songs that bring me back to my apartment in Berkeley during law school, its dark wood floors and big windows looking out on the neighborhood’s umbrella of trees. I loved living by myself, singing as I made dinner or danced around my living room. I close my eyes; is it disloyal of me to revel in these memories of solitude? Not after a week of being together in an RV. I try a thought experiment: I put “today me” in that apartment alone, without Christopher or my sons, and it is another thing entirely. A missing, a loneliness.

The Bluetooth music cuts out, and we let it be quiet for a stretch. The sounds of our boys screaming at each other make me jump. I can’t tell if they are angry or having fun. I sigh, knowing that in an hour or so we will de-board this beast, get real showers, real beds and room to spread out and away from each other. I can picture the moment when we will exit I-95, maneuver around the nearly-360-degree exit ramp that will require Christopher to slow waaay down to keep the bowls and glasses and cutlery from making their spine-rattling crashing sounds. I can picture the familiar stop light at the end of the exit, and the wide left turn onto Taylorsville Road a couple of miles from where he grew up. I can predict how we will feel on that stretch of road knowing we are ten minutes away. Anticipation. Relief.

I lean forward to pick up Christopher’s phone to get the music playing again, and there is a green rectangle, a text message for him. “Mitch passed away,” it says.

My heart fills with something acrid, rotten. Turned lemons. A bag of sand. This? What is this? At that moment, Aaron comes forward to ask me something, and he is over my shoulder and reading the message at the same time I am. Christopher sits straight at the wheel, his hands at “ten and two,” his mind focused on our arrival, the first time home since his father died. This message would be a three-car pile-up. These words are us swerving out of our lane into the wall. I give Aaron a look that says, Don’t say anything yet.

I swallow. “Can we pull over at the next rest area?”

“Are you feeling sick?”

“Is it your stomach?”

We keep driving in silence, Aaron and I holding the information that has been true for maybe a couple of hours, and which has changed everything. Mitch, my cousin Liz’s husband. Mitch, Christopher’s friend and hiking companion; his confidant and sounding board; his fellow long-suffering-now-finally-victorious Philadelphia Eagles fan. Mitch is his person at big family gatherings. The person who inspired him to hike the Grand Canyon from rim to rim last year, and with whom he planned a repeat trip this year, until it was postponed by COVID. Mitch, who is kind and gentle and thoughtful and curious and true. And only 58.

The engine goes dark. I swivel my feet to face him. I take a breath like you’d take before jumping into a deep cold lake, fingers pinching your nose, body clenched in anticipation of the shock. “You got a text. It’s bad news.” He nods. How odd that he looks as if he knows what I’m going to say. But then I say it and his face opens like a gaping hole.

“No.” His head shakes. This is not what he was expecting. He takes the phone from me. Reads it. “No.”

He gets up, passes Aaron and Emmett who are now silent on the couch, and flees out the door, as if he can get away from this news by going outside. I know that he will be calling Mitch’s son Nathan, who is only few years older than Aaron, and who Christopher has spoken with almost every day since he and his father brought him into their business as a brilliant computer coder a couple years ago. I kneel in front of my boys, and pull them to me. They hold me in answer. The shock lifts for a moment to let tears roll before it settles over me again.

I release them and say, “I’m going to go get Dad.” I walk out in the yellow light and damp air, scan the rest stop, and see him thirty yards away next to a wall of some kind, phone held to his ear, bent in a ninety degree angle as if in bowing in prayer. I get to him, rub his back in circles with my right hand, and hold his shoulder with my left hand, as if my touch can keep him grounded in his body where we need him to be for one more hour, not soaring on a flight of fresh sorrow, not yet. I hear him telling Nathan how much Mitch loved him. When he stops, I take the phone and speak to Nathan, too, as if words could be beads of love placed around his neck. I repeat myself, useless phrases, trying to lay another strand. “We love you, Nathan.” And somehow we say goodbye.

I guide Christopher back to the RV, which is halfway into a diesel filling spot. Inside, the four of us sit facing each other and talk about the father and husband and friend we just learned we have lost. Christopher says he has been sending Mitch photos from our trip, of Zion and the Rocky Mountains, hikes they might do together some day. I touch the edge of understanding that maybe my boys are thinking about their father’s mortality. I think about how Nathan and Christopher have both suffered the loss of their fathers within five months. What more can be said? Life is exactly this absurd.

“I’ll drive,” I say, but Christopher insists he’s okay to finish this. He starts the engine and pulls out. Aaron takes my place in the front passenger seat, keeping his father company, and I take his place on the couch. Emmett puts his head on my lap, and I lift my arm to stroke it. I am not sure if he is seeking comfort or offering it, but the movement does both. I work up the courage to call Liz. We have been childhood playmates and led parallel adult lives, and now we are here. We talk for a few minutes. I tell her that on our first day of the trip, Christopher told me that Mitch had called him a little while back saying there was great hiking weather in Zion, and did he want to drop everything and go? He couldn’t then, but Mitch showed him that paradise is within reach, closer than we think. All we have to do is decide to go.

Now we are circling the exit ramp. It is both as I had pictured it would be, and ghastly different. We whisk past tree branches and 18th century farmhouses and bridges crossing over the canal to our right. Emmett makes a guess as to how many minutes until we pull into the driveway, the game we used to play on rides home from the airport, when Christopher’s dad would pick us up and move into the passenger seat for Christopher to drive home. “I’ve got 10:52,” he says. No one else makes a different guess.

We make our final turn. We are two blocks away. I hadn’t remembered the speed bumps. They make our final approach as slow as our tentative beginning had been. I can’t believe we drove here from our house.

We look for the mailbox shaped like an English Springer Spaniel, but it has been replaced by a plain rectangular box. It is one of several things that will look different this week. Christopher pulls in front of the house as close to the curb as he can, trying to fit between his mother’s driveway and the neighbors.

And then he turns the key, cuts the engine and the sound lifts away. Our bodies get up, squeeze around one another, gathering what we think we need with us tonight. One of the boys opens the door. It stops halfway, blocked by the rise of the grassy hill in front, but they push their way out and walk up the long driveway. Christopher and I gather a few more items — a laundry bag with the week’s dirtiest clothing, a computer case, a few more toiletries. We gather ourselves. It takes a few minutes. Then we descend into the thick night, into the songs of unseen birds and insects. The grass scratches my feet over my flipflops. We walk the dark curve of driveway toward the small figure in pajamas who has come out to see what is taking the parents so much longer than the teenagers. We open our arms as we approach.

We made it. Changed in ways unimaginable. 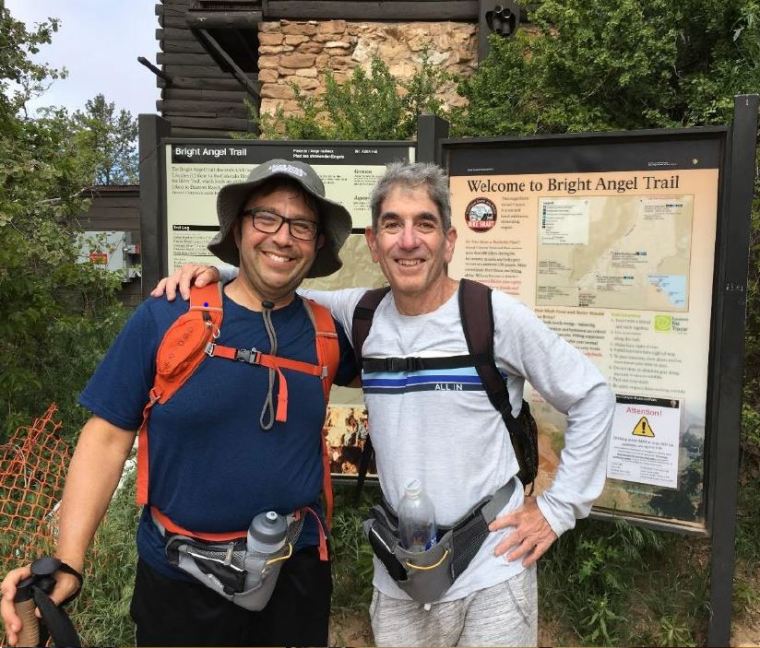