Musical beds was getting the better of me. For weeks, our seven-year-old son had refused to sleep under a blanket, out of fear that dinosaurs would get his feet down there. As the nights got colder, he appeared at my bedside every night. At first I’d try to sleep with him wedged next to me, but it was no use. Our bed was not big enough for three. Some nights he would tag my husband, who would dutifully rise from the stasis of his hard-won dreamstate and stumble to our son’s bed. Other nights, and increasingly, he would tag me. I was becoming our older son’s roommate. “Hi, Mom” replaced “Good morning, honey” as the first words I’d hear each day.

I’d had enough. I decided that the next time the little guy came to our bed, we would simply, steadfastly refuse. What ensued was not pretty.

The ruckus began at 2 a.m., when we didn’t budge in response to his entreaties. This was unprecedented. This was unwanted. This was war. For the next three hours, he screamed, moaned and refused to go to his own bed. He claimed it was too cold. His language got salty. “It’s so cold in my room” turned into “It’s so frickin’ cold” and finally, yep, “It’s so FUCKIN’ COLD!”

Calmly we explained, “The heater is on, you just need to LIE UNDER YOUR BLANKETS.” I reassured myself that it was reasonable to expect this, that it was his choice not to put the blanket on, that being a loving mother did not require getting kicked out of bed every night. At last, as dawn approached, he went to his room and fell asleep in his bed. Not under his blankets, mind you, but with stuffed animals piled on top of him. (It did not escape my notice that he was adept at arranging soft warm items to cover him when it suited him.)

The next morning as we walked to school together I tried to think of something that would allow him to think of his own bed as a place of security and comfort. A crazy idea came to me.

“Do you know what I have?” I asked, my eyes bright with the hope that this might be the answer to our troubles.

He eyed me cautiously. “What?”

He was intrigued. “What’s that?”

“It’s something you spray around your bed, so dinosaurs won’t come near. It smells like flowers, so the carnivores really hate it.”

I expected him to scoff, snort, roll his eyes. He’s a modern kid, not easily fooled. So it surprised me, and gave me hope that imagination is not dead, when he asked, “Can you also spray it on pillows?”

As soon as he got home from school, I handed him the bottle of dinosaur spray. I had planned to fill an empty spray bottle with water and a drop of baby oil to present to him, but all I could scrounge up was lavender air freshener. He sprayed the hell out of his room, around his bed and above his pillow. It reeked. I had to open a window so we could breathe. I apologized to his brother, whom I had asked not to ruin the story, and who graciously kept quiet.

To my surprise, it worked immediately. He stayed in his own bed that night.

What’s more, we have had no nightly visits since. Truth be told, I’m not sure why. He has long since stopped spraying the spray, and he still doesn’t wear his blankets — he now wears two pairs of pajamas and socks. I still tiptoe into his room after he’s asleep and put blankets on him, but he kicks them off within minutes.

What have I learned from all this? He has his own way of doing things. He is opinionated. Defiant. Persistent. Creative. We butt heads. We celebrate small triumphs. We search for solutions that may not come. I tinker around the edges, trying to ease his way. 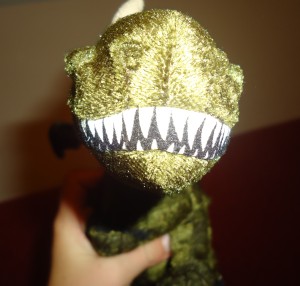 One thought on “Night Frights, part 2 (or Dinosaur Spray to our Rescue)” 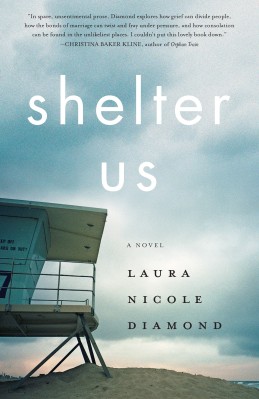 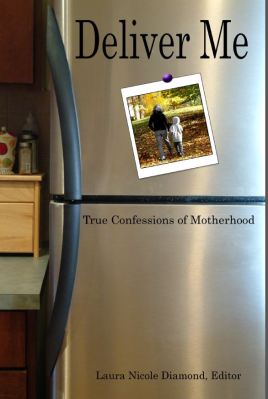 Click cover to Buy Deliver Me: True Confessions of Motherhood