I’ve heard from friends today and the past few days asking — who should I vote for for Mayor? One said, “I’ve never been undecided this close to election day. Who are you voting for?”

Well, since he asked, I’m happy to tell him. I’m voting for Wendy Greuel.

Let me say, there’s a wee tad bit of discomfort in talking about this. There are some lovely people with a different point of view. I’ve got no problem with that. I’m not trying to shill for votes (okay, yes, well, I am) but I’ve got two very good reasons for doing so:

1. A friend asked my opinion, so I’m giving it to him in this very private way. (Really, I don’t have that many readers.)

2. I was very impressed with Wendy after meeting her, and I’ve heard excellent reports of her can-do effectiveness from people I trust.

Some of you know my mom. She is fantastic. She is hard-working, loving, committed to healing the planet (and really needs to learn to say “no” more when asked to serve on committees or, ahem, to babysit…pleading guilty here). She is a woman who walks the walk. Literally. She has canvassed and gone door-to-door and made phone calls (I hope you were polite to her).

Last night she asked me to do her a little favor, while I was in the “Expressing Motherhood” show to express my mother’s deep wish, to tell people who may be wondering, who may be undecided, to please vote for Wendy. Do it for your city, do it for yourself. And if all else fails, do it for my mom. .

Pandering for votes, or helping undecided friends make up their minds, or simply a belated Happy Mother’s Day.

This week is the Grandmother Power Blogging Campaign, brainchild of photojournalist Paola Gianturco and writer/inspirer Tara Mohr. The goal: to connect women to flex their power to change the world. 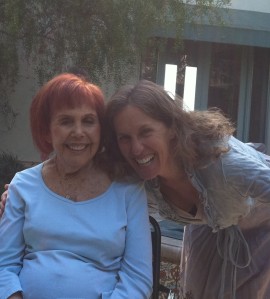 Me and my grandmother, Lilli, on her (nn%&*st) birthday last year.

And why not? Grandfathers have run most countries and Fortune 500 companies. We could use more healing Grandma power, and Grandma strength. My kids are lucky to have two of the best.

In that spirit, today I bring you my mom, Fran Diamond, in her own words.

Take it away, Mom!

My own Grandmothers, Rose and Sarah, gave me love, comfort and life lessons that are with me still. Grandma Rose enveloped me with pure love and endless admiration whether deserved or not. Baba Sarah loved me as much and set an example of humility and generosity. They set a high standard for being a grandparent.

Today my four grandchildren inspire me in so many ways, including the work that I do. Knowing that what I do affects them makes an enormous difference in the decisions that I make and how I look at things. 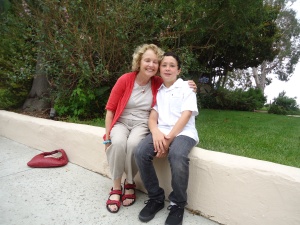 For over forty years there have been two themes to my life’s work: Environmental activism and electing pro-choice, progressive women to public office.

Since l999, I have served on the California Regional Water Quality Control Board. Our mission is to restore and protect the surface and groundwater of Los Angeles and Ventura Counties. We have made tremendous improvements in water quality. Just looking at the Heal The Bay report card, you can see that many beaches that were given F, D, and C’s before are now A+ most of the time. When I see surfers in the water or families at the beach, and when my grandkids go boogie boarding, l know that my work is making a difference.

That is what keeps me going, as hard as it is at times. When we are debating policy issues and scientific standards, I think what is best for those kids and the future. I see the beautiful, sweet faces of my grandchildren, and I know what I have to do.

Even before I became an environmental activist, I worked to elect women to public office. In the early 1970’s there were no women in the U.S. Senate, or for that matter the California State Senate. Without women’s voices we don’t really have a representative democracy. Women bring a lot to the table that is different from men. I believe that women are more collaborative and naturally think of what’s best for children and families. It is my belief that when both candidates are equally qualified, we should vote for the woman until we are closer to parity in elective office. Right now there are only 20 women in the U.S. Senate out of l00. Next year we may have no women on the Los Angeles City Council or citywide office. That is shameful. That is not the world I want my granddaughters or grandsons to live in.

That’s part of why I am working to elect Wendy Greuel to be the Mayor of Los Angeles. I have known and worked with both candidates for a long time. They are both good people. Wendy Greuel, however, is the most qualified and has the leadership skills to move L.A. forward. What I know about Wendy Greuel is that she listens to all sides, can make decisions and knows how to implement them. She knows how to get from A to Z. She is willing to tell people what they might not want to hear. She is tough, decisive and fair. Los Angeles has been a city for l63 years and we have never had a woman Mayor. Now it’s time. I know that both my granddaughters and my grandsons will benefit from having Wendy Greuel as Mayor.

This year I will turn 70. I have never been more inspired to achieve my goals. Maybe it is because of four amazing young people, Rebecca, Noa, Aaron and Emmett my adored grandchildren. Through them I can touch the future. And it is amazing.