Last week my husband and I celebrated our 17th wedding anniversary. I have often thought that one of the keys to our marriage has been our similarities, such as when one spouse suggested dumping our house to be nomads for several months and the other said, “I was thinking THE SAME THING!” See what I mean? You gotta be on the same page for that whack.

But there is a fundamental way in which we are not the same: one of us meets challenges head-on, sticks with projects that are difficult, and stays calm and patient throughout. The other one is easy to quit, throw in the towel, and call in the experts to do it for her. (I knew you knew which was which.)

Case in point: The anniversary grill.

This year we decided to get a grill as an anniversary present to ourselves. Somehow that icon of backyard suburbia had eluded us lo these many years. So my husband sprung into action, went to Home Depot and came home with a grill. One minor problem. A pre-assembled grill would not fit in our small trunk, especially not with two boogie boards left in the trunk. Oops.

That’s the point when I would have said “never mind, maybe we’ll grill next summer,” or “let’s pay for delivery.” But Christopher, undaunted, bought an unassembled grill, opened the box (because even that box didn’t fit in the car), put all the separate pieces in the trunk, and brought it all home. 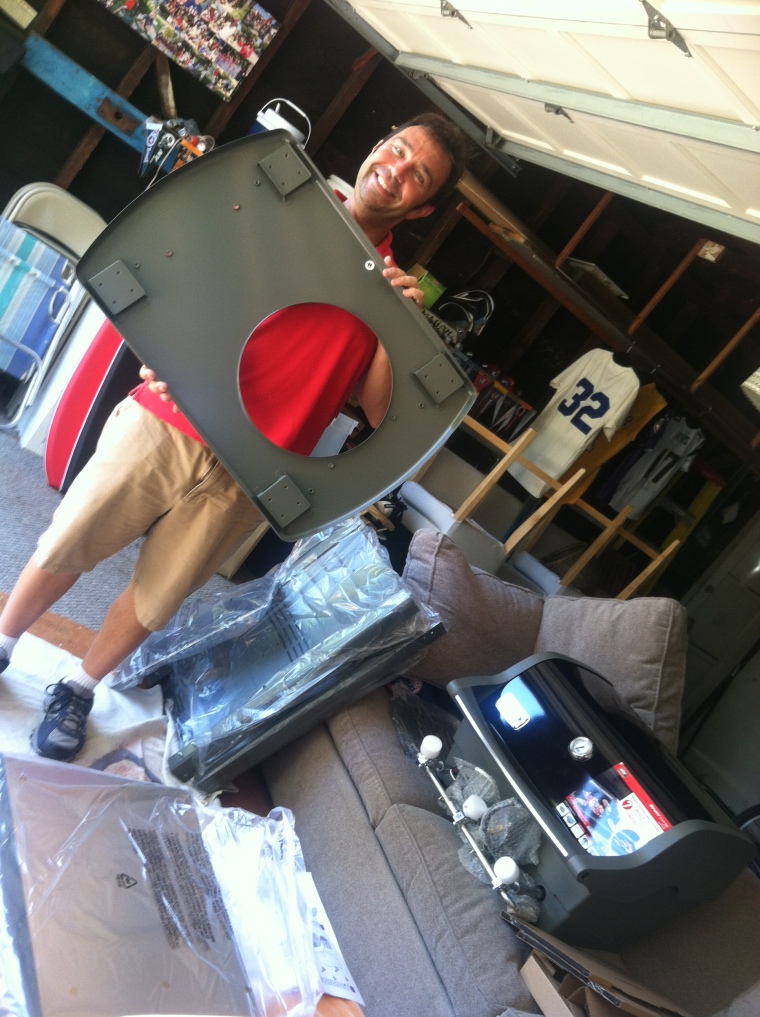 He got home, we unloaded the parts, and everything was still hunky-dory.

Until he took a look at the instructions.

I left him to it. He had opened this Pandora’s box of grill himself, and I trusted he would see it through. That’s how he rolls. A lesser person (me) would have dragged it all to the curb with a sign that said “Free.”

When he finished he asked, “Are you done sitting outside?”

“Because I’m going to go try the grill and I don’t want to kill both of us.”

Bravely he went outside. I stayed close to the phone ready to dial 911. All was well.

The next night we ate burgers and hot dogs surrounded by the family that had raised me to call experts for engineering feats (like lightbulb replacement), and we basked in his glow of utter competence. A keeper, this one.

My sister and I had a favorite sight gag as kids. Hold up your middle three fingers toward someone, palm facing you and say, “Read between the lines.”

This is something different.

Our eight-year-old is assigned to read 20 minutes every night. And every night, as we open a book to read, he rolls over and says, “You read. I’m too tired.” We try gimmicks – “I’ll read one page (or paragraph, or sentence) and then you read one!” Mostly he refuses, and mostly I give in and read to him. With his school reading scores pretty strong, I justify it thusly: it’s a wonderful thing to be read to, we are building cozy memories.

But still I worry (of course I do). “He must do the assignment! He must improve! He could be reading at an even higher level!” (Trust me, as I write this I am even annoying myself.) I continue to pester him about reading, and he continues to resist.

Then, this morning, a most inexplicable turn of events. On the drive to school, the little guy agreed to help his brother practice lines for the balcony scene in Romeo & Juliet. Motoring along the palm tree lined Ocean Avenue and San Vicente Blvd., my son who balks at reading The Hardy Boys aloud, eloquently read aloud the immortal words, “Romeo, Romeo, wherefore art though Romeo?”

He did the entire scene, until he bumped with embarrassment over the word “breast.” It went downhill from there, screeching to a halt at the word “marriage.” He had a problem with saying he would get married to his brother. “Daddy,” he said with no room for negotiation, “you have to say the M-word, cuz I won’t.”

This from a kid who has no qualms spouting words more commonly known by their first letter. Which reminds me, I think he’d enjoy our old sight gag.

January 27, 2000. I was sitting at the kitchen table finishing a bowl of cereal, soaking up the unlikely view from our window – a secret farm hidden behind a bland 4-unit apartment building on our crowded block of bland apartment buildings in West L.A. I used to call it Brentwood, but it was more Wilshire than San Vicente. Yet my morning walks took me past Monica Lewinsky’s father’s home and the townhouse where O.J. didn’t murder anyone. So Brentwood seemed a reasonable designation.

This view from the kitchen window was the selling point of our apartment. Where else in a densely-packed post-grad-school neighborhood could a person enjoy such fertile beauty? In the garden, my neighbor worked amidst his rows of lettuce, tomatoes and sweet peas, his wide brim hat spreading out as far as his shoulders. He must have lived there for decades, I thought, cultivating the soil behind his building, while on the other side cars competed for scarce parking spaces and tiny dogs soiled the sidewalk, oblivious to the existence of his magic garden.

We had lived there for two years, a long time for us at that point in our lives. It was our first apartment together, my husband and me, the place that put an end to the nightly question as our courtship advanced, “Whose place tonight?” Now we had only ours. Soon we would be moving to our first house, leaving this place that launched our marriage.

My next-door-farmer turned his head, caught me watching him from above, and waved to me. I waved back, an embarrassed voyeur. At the sound of the ringing phone I stood up like Pavlov’s dog and moved to answer it. The clock on the wall said 8:05. It was time to go to work, my other place in the world. I was dressed in casual clothes suited to my identity as a public interest lawyer. I had a touch of the self-righteous to me, working for equality and civil rights. My grandfather, long suffering from Alzheimer’s disease, had nonetheless managed to hold onto his nickname for me, “The Lady Lawyer.” It made him laugh whenever he said it, maybe owing to a disconnect between his perception of me as a little girl, and a lawyer. Maybe he thought I was playing dress-up. “Laura the Lady Lawyer.”

He was on my mind. After many years of being cared for at home by my grandmother, she had added a daytime caregiver. The woman was loving, kind, and strong enough to get him in and out of bed, and to the bathroom. But when the caregiver had to be out of the country for a week, my grandmother knew she could not take care of him on her own. Reluctantly, and at his doctor’s urging, she called a nursing home. After a few days there, he had developed pneumonia. Now he was in the hospital.

I had visited them every day. Them, because my grandmother was always there. I was as worried for her emotional state as his physical. She stayed in that room, fed him, sang to him, told him jokes, trying like hell to get her husband to come back, even for a second. She leaned up close to his face, shouting a punch line. “A million dollars, Al. Get it? A million dollars!” Eyes closed, he nodded. He tried, for her.

“Hello?” I answered the phone. I couldn’t see the farmer anymore. I knew he was still out there, moving down the row, removing weeds and dead leaves from the vegetables bursting out of the ground.

Instead of going to work, I drove to my grandparents’ apartment – their last shared home of a 63 year marriage. My parents, aunt and uncle, and a cousin were already there. My sister and three-year-old niece Rebecca arrived.

“Where’s Al?”  Rebecca asked her mom, puzzled as to his absence from the chair she always saw him sitting in.

My sister answered with words I didn’t expect: “Grandpa Al is in heaven now, with his mommy and his brothers and sister. And he can see you and hug you.” My sister’s eyes flooded as she spoke. We shared a look that said, “Do you really believe that?” and “I don’t know — maybe.”

“Oh,” Rebecca replied. Her mother’s explanation fit naturally into her magical world view. She reached her arms straight up, receiving and returning his embrace. I watched, jealous, wanting to be able to hug him, too.

Now I sit here at my desk, twelve years later, and reach for the sky.